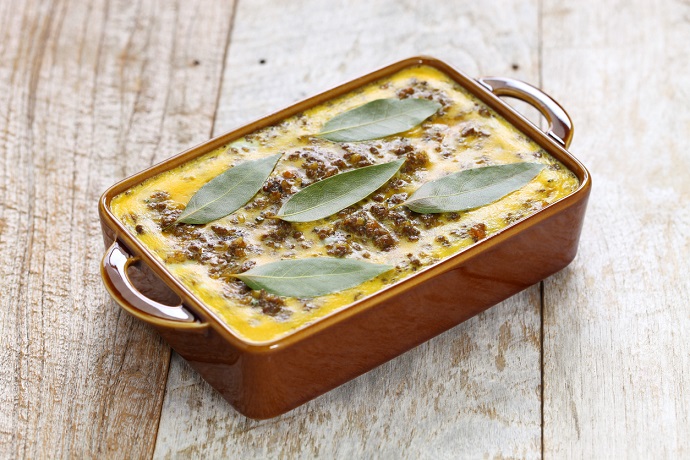 As a result of a long history of political and social upheaval, South Africa is a melting pot of many cultures. Traditional tribal foods come together with the European influence of England, France, Germany, Portugal, and the Netherlands for a uniquely flavorful cuisine.

Traditional South African food draws on dishes created by the black majority before colonization, by European colonizers, and by the Indian and Malay slaves colonizers imported. It is hearty and richly spiced, and relies upon grains (e.g., corn, millet, barley, sorghum), veggies (e.g., amaranth), beans (e.g., kidney beans, cow peas), and animal protein (e.g., sheep, seafood). Meat is eaten frequently, in whole cuts or incorporated into an array of sausages, stews, and curries.

Corn is South Africa’s main crop, and a national staple. Fine-ground cornmeal forms the basis of smooth porridges, whereas coarse-ground corn is served as a crumbly, starchy side dish. Whole corn kernels are eaten on the cob, fire-roasted, popped, and even steamed in bread.

Fruits, especially apples, pears, and grapes, feature heavily in South African cuisine. As well as eating fruit fresh, South Africans often incorporate dried fruits in sweet desserts and savory dishes — like bobotie (pictured), a curried meatloaf that incorporates raisins or sultanas and is topped with an egg custard before it’s baked. They also preserve fruit in the form of jams, chutneys, and wines. Although grapes weren’t introduced to South Africa until the 1600s, they’re arguably the country’s most important fruit — after all, South Africa is one of the top 10 wine-producing countries in the world.

South African cuisine is rich in fish and shellfish. Oysters are especially abundant. Popular snacks include bokkoms, dried and salted harders, and whole deep-fried whitebait with lemon and tartar sauce.

Breakfast is often something simple, like hot or cold cereal or amasi, a fermented curdled milk product similar to plain yogurt or cottage cheese. South Africans might also enjoy home-baked goods like rusks — crispy oven-dried biscuits meant to be dunked in coffee — or a seedy bread toasted and spread with butter and fruit preserves.

Lunch is a smaller, more grab-and-go-style meal. South Africans might pack a sandwich or grab fish and chips from a shop close by. Popular fast food items include:

Dinner is often braaied, or barbecued, meat. Braai is also a larger term that encompasses the social occasion of getting together for a barbecue. Afternoon braais are such a popular tradition that South Africans have renamed their national holiday “Braai Day.” Barbecues meat is accompanied by corn on the cob, and assorted condiments.  Boerewors, farmer’s sausages made with beef, pork, and coriander seed, round out the meal.

From Our Kitchen: Pasta Primavera with Marinara Sauce