Alternative Proteins — Can a Burger Save Us? 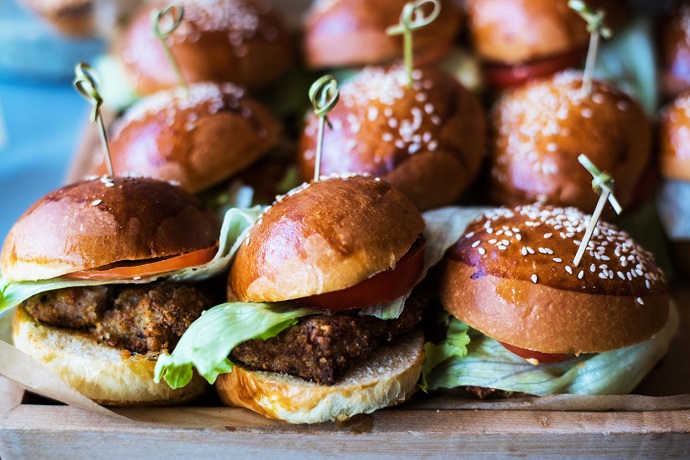 Recently, there’s been a proliferation of alternative meat products in the market. These are different from traditional meatless options, such as black bean burgers or soy hot dogs. Backed by venture capital and celebrity endorsements, these new alt proteins, with names such as Beyond Meat® and the Impossible™ Burger, have shown up in restaurants, grocer’s freezers, and — of course — television, but are they worth all the hype? We were curious, so we went beyond the marketing slogans and looked at the evidence. Here’s what we found.

Alt proteins aim to get omnivores to reduce their consumption of animal protein by simulating the meat-eating experience. They’re created using pea, potato, wheat, and/or soy proteins, along with coconut or palm oils, to mimic the taste and feel of animal protein. To make these products “bleed,” manufacturers use beet juice, pomegranate, or a plant-based heme that’s been engineered through synthetic biology.

And the field is growing. Up next are synthetic chicken, pork, eggs, and fish. New technologies are on the horizon as well, including products made from a mix of meat and plant proteins, cultured meat made from animal stem cells, and 3D-printed synthetic meats.

Why the burgeoning interest in plant-based diets and alt proteins? Backed by research, many people believe that eating less meat and more plant-based foods will benefit the environment and human health. On top of this, with an expanding population competing for a finite amount of arable land, growing animals just to consume their protein seems inherently less efficient than just consuming the vegetable protein directly.

But if livestock farming, especially beef, contributes to climate change, will eating alt proteins really save the earth? Research has shown that alt-protein production generates fewer greenhouse gases and uses less energy, water, and land than is required for beef. Simply producing a bean burger, however, would save even more. Further, there’s been a lot of press devoted to deforestation caused by expanding palm oil and coconut oil plantations; coconut oil is a primary ingredient (top five) in most of these new burgers.

Alt proteins aren’t necessarily any healthier than beef either. The tropical oils that alt-protein burgers use to enhance texture make them comparable to beef burgers in saturated fat content. In addition, products currently on the market are higher in sodium than beef patties, averaging 15% of the daily value for sodium versus less than 5% in plain beef burger patties. On the other hand, alt proteins provide the benefits of fiber with 2-3 grams per serving, which isn’t present in comparable meat options. You might also notice that alt-protein meats boast high levels of vitamins and minerals. Those were added later in the manufacturing process; they’re not inherent in the product.

There are also potential repercussions for those with food allergies. First, there’s the issue of heme, an iron-containing molecule, which provides the look, taste, and smell of meat. Alt-protein manufacturers engineered a new protein, soy leghemoglobin, a plant-based option to replace heme from meat. The Food and Drug Administration (FDA) has raised concerns. Food allergies are immune-mediated reactions to proteins, so soy leghemoglobin and other proteins created in the generation of alt protein could cause allergic reactions in the population. Despite these initial concerns, in July 2019, the FDA approved the use of soy leghemoglobin as a Generally Recognized as Safe (GRAS) food additive based on research completed by Impossible Foods. Even with GRAS status in place, some concerns remain that these unidentified proteins could cause allergic reactions.

Several alt-protein varieties carry a special warning urging caution for those with a severe peanut allergy. The issue is that alt proteins contain pea proteins. Because both peas and peanuts are legumes, there’s the potential for cross-reactivity in people with peanut allergies. It’s estimated that 5% of people with a peanut allergy may experience symptoms because of cross-reactivity, even if they’ve never had problems with peas before, because the pea protein in these manufactured products is highly concentrated.

Ultimately, it’s too soon to assess the long-term impact of these synthetic products for both the environment and for humans. Research will eventually catch up to the market, but for now, it’s up to each person to decide whether alt proteins have a place on their plates. If your community wants to try the new manufactured foods, higher cost and limited availability create challenges, but we’ll do our best to source the product for you.

We have an All Foods Fit philosophy. We provide our communities with a wide variety of options, including vegetarian and vegan dishes, fresh fruits and vegetables, and whole grains. We’re committed to cooking foods from scratch, which allows us to control our ingredients and provide clear, easy-to-understand ingredient and allergen labeling that lets all community members eat safely and confidently in dining halls.

In our kitchens, we’re constantly developing new plant-based recipes that will appeal to omnivores and vegetarians alike, from Vegan Kung Pao Cauliflower Bites to Quinoa Sliders with Harissa Mayonnaise and a wide variety of vegan and vegetarian burger patties. We hope you’ll join us in trying something new the next time you’re in the dining hall.

30 Years of Innovations: Defining the Standard

Food Additives from A to Z