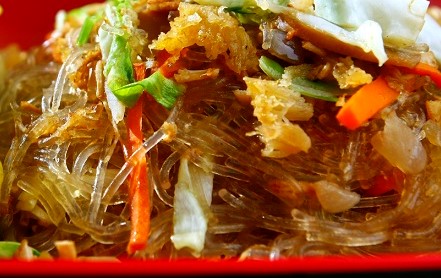 Experiencing Filipino cuisine is like taking an intimate walk through the country's rich and varied history. Located in Southeast Asia, the Philippines nation comprises more than seven thousand islands, forming the Republic of the Philippines archipelago. The islands' long history of colonization is ever apparent in their culture and food.

Named for King Philip II of Spain, the Philippines were part of a Spanish colony for more than 300 years. Before the discovery and subsequent Spanish colonization, the Philippines enjoyed commerce with China, followed by a brusk trade with Muslims from Indonesia, which lend to the rich tapestry of religion and culture found in the archipelago.

No matter which Philippines island you're visiting, you'll find food influences from Southeast China, India, the Middle East, France, and Spain. China introduced the Philippines to fish sauce, soy sauce, rice, egg rolls, and stir-frying, while the longstanding Spanish colonization brought tomatoes, cattle farming, and cutlery. Depending on where you are in the Philippines – and the style of restaurant in which you're eating – you'll be provided with chopsticks, banana leaves, or a fork and spoon to enjoy your meal. In the absence of any eating instruments, food is meant to be enjoyed using the fingers of one's right hand.

You'll find many familiar dishes in the Philippines, each prepared with Filipino flavors and flair, such as Maruya (banana fritters like fried plantains), Lumpia (Filipino-style egg rolls), and Pancit (a stir fry noodle dish). Perhaps the most recognizable dishes are prepared with one of the highly popular sauces and preserving spice profiles: adobo. You'll find pork and chicken the most common meats prepared with adobo, a vinegar-based sauce with garlic, black peppercorns, and soy sauce.

It would be remiss to talk about popular Filipino dishes without mentioning Lechon. Called the national dish of the Philippines, Lechon is a roast suckling pig. Though the name is Spanish, the spices used make Lechon a Filipino dish; lemongrass and tamarind are just a couple of the seasonings used for this whole roasted pig. A close-knit people, you'll find Lechon served at Filipino family gatherings and celebrations.

In addition to fresh fruit, Filipinos enjoy various sweets that center around a few staple ingredients: banana, coconut, coconut milk, yam, and rice. The most recognizable dessert to the Western palate is Leche Flan or Crème Caramel, with its silky-smooth custard made from milk, eggs, and sugar.

Filipinos typically eat three meals a day with two snacks – or meryenda – between meals. Rice is a central ingredient to meals in the Philippines and is served with every meal, which pairs well with the abundance of fresh fish, pork, and vegetables they eat. Flavor profiles in the Philippines lack the chiles Asia's heat are known for but are abundant with sweet, sour, and salty flavors.

Eating is a social activity in the Philippines, with many customs surrounding it. Meals are all about family togetherness and function as a way to connect all members of the household. Celebrations and gatherings often feature bountiful feasts at the center, with friends and family literally breaking bread together. In fact, instead of greeting people with a "hello," it's customary for Filipinos to say, "let's eat," or ask, "have you eaten?"

Hospitality goes hand in hand with food in Filipino culture. When you're invited into a home, don't turn down an offer of food, you'll offend your host, but do ceremoniously reject food the first time it is offered (it's customary and considered good manners).

Filipinos don't typically use knives. Instead, they use a fork and spoon. The fork always is held in the left hand to usher food into the spoon held by the right hand.

STEP1: Cook rice noodles in boiling water according to package instructions. Drain and set aside.

STEP 2: Beat egg. Cook and scramble with ½ tablespoon of vegetable oil. Set aside.