Crack Open Some Eggnog For The Holidays 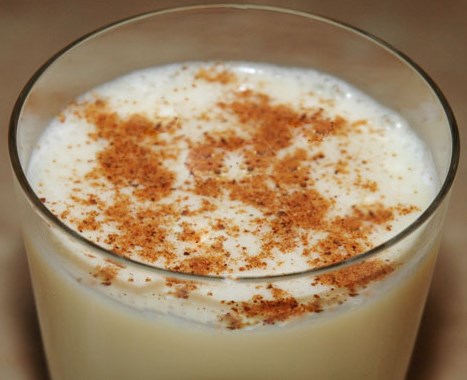 It's that time of year again – cue the holiday music, hang up those stockings, and sip a creamy cup of eggnog next to the fire. We know, we know, half of you just said, “Yum, I love eggnog,” while the other half said “Eww, no way!” Eggnog can be a polarizing food at many holiday gatherings; people either love it or hate it. Yet it remains a holiday staple.

Some food historians say eggnog originated during British medieval times as a drink made from sweetened hot milk curdled with alcohol.So where did the eggs come from? British monks from the 12th century may have added whipped egg, sherry and even figs into the mix. In the 18th century, eggnog was brought to US colonies. Instead of high-end liquor like brandy or sherry, colonists added inexpensive rum from the Caribbean.

The name eggnog is thought to be a combination of two colonial slang words. Rum was called grog and bartenders served rum in wooden mugs called noggins. And so egg-n-grog was born and later shortened to eggnog. By the 19th century, eggnog had become a holiday tradition. George Washington served it to visitors at Mount Vernon. Eggnog even started a riot at West Point Military Academy when cadets rebelled against an alcohol ban that kept them from celebrating Christmas without their precious nog!

Traditionally, eggnog is used to toast health and prosperity. As with most holiday favorites, many recipe variations exist. A recipe from 1862 includes powdered sugar, egg, brandy, rum and a touch of ice. Modern recipes often call for nutmeg and cinnamon to add spice and flavor. If eggnog is on your grocery list this holiday season, a vast array of options exists, including plant based, egg-free, grass-fed, low-fat, and organic varieties. Look for flavored eggnog, such as pumpkin spice or caramel, for a new twist on an old favorite.

Happy Holidays from your SAGE Dietitians and remember: all things in moderation, even eggnog on a cold and snowy winter night.