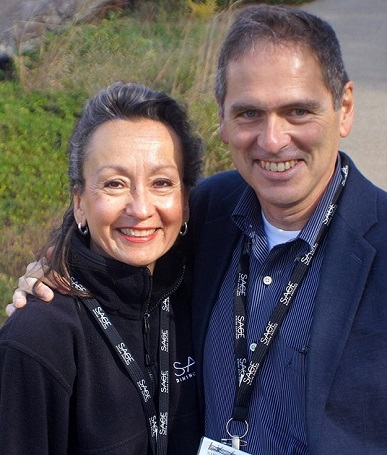 SAGE was founded on May 22, 1990. To celebrate SAGE’s 29th birthday, we sat down with cofounders Tina and Paco Rodriguez to talk about changes in the food industry, their most memorable achievements, the characteristics that have made them successful, and balancing work with parenting four kids!

How did you get into food service?

Tina: My grandmother was a spectacular chef and baker, and my love of cooking and food started there.

Paco: My dad was a chef, waiter, maître d’, the best cook in the family. He cooked every night—when he was home. One of [my early] lessons [was that] the hours in the restaurant and hotel industry can be gruesome.

Paco, you’re President now. And Tina, you’re CFO and General Counsel. How did you divide up the workload—at SAGE and at home with four kids?

P: When I was president of a company that had only four locations and 100 employees, I spent a lot of time visiting venues and helping out, even doing dishes and cleaning tables.

T: My job was always overseeing the administrative side of SAGE. We were raising four little kids at the same time that we were starting this company, so somebody had to stay put. I chose to stay here and juggle the kids.

P: Sometimes she would travel just so I could see what it was like.

T: [Laughs and nods] Yeah. I’d get frustrated and go, “You stay here. Pick up this kid at this time and then this kid here and this kid here, and don’t forget lunch, and then you’re cooking dinner. I’ll see you later!”

How has the food industry changed since SAGE started?

P: [Today, 8% of school-aged kids have a food allergy]. In 1990, people weren’t allergic in these numbers. The main thing you could do to endanger people was to run dirty kitchens. But now, you could have the cleanest kitchen in the world and still endanger people.

P: Our business partner at the time, who was a CIA-trained chef, said, “You have the people. You need to use them to make the food. The product that you make will be better, and it’ll be cheaper than the stuff that comes from a factory. Nobody wants to eat that stuff.”

T: In 1990, that was radical. Fast forward years later, the American consumer is moving away from processed food. And that’s what we’ve always been doing.

P: When we started in 1990, the [financial] statement that a food service company issued could be as few as five lines, with a big line called miscellaneous.

P: Seriously. It’d be food, labor, and then miscellaneous. There was no transparency. And in that environment, we created SAGEware® [our proprietary financial software], which has over 50 lines of specific expenses.

What about SAGE are you most proud of?

P: When we do something, it doesn’t happen in a vacuum. The whole world sees it. It becomes the standard for what other companies do. So you’re not seeing anyone do those statements with the five lines anymore, because they can’t get away with it. [Similarly,] they can’t make-believe food allergies are somebody else’s problem, because there are folks who deal with them—namely, us.

SAGE has grown from four venues in four states to over 250 venues in 35 states, plus D.C. and British Columbia. How’d you do it?

P: Outside investors could’ve given us a big pot of money to do acquisitions. But we didn’t. We did it based on people picking us.

T: After sales presentations, we consistently hear, “The thing that came through so clearly was your passion for what you do.” The word’s been overused. But what it really stands for is this: you hold yourself to a high standard and you make sure that everybody around you is working to the same standard. That gives people comfort.

What personal characteristics do you think have made you successful?

T: [Laughs and rolls eyes] We just love this. This is an image of who we are. I’m very proud of what we do. I think it’s that belief in your mission, the belief in the product that you’re selling, that comes through. It’s not just a job; it really is personal.

P: One of the skills that’s been really helpful is something we honed in consulting—listening. You can’t solve people’s problems if you’re not listening to figure out what those problems are. You get invited to help people, because you’ve offered them a solution. And you [get invited to] stay because you recognize what you’re hearing, or what you’re seeing, and you fix it.

T: Honesty is a big part of it. There are always problems; that’s just a fact. But it’s how you approach it. It’s being able to walk in and see everything in an objective light, to see it as fixable if it’s not perfect.

P: You have to be able to come clean in front of a person. We try never to go to a meeting unless we’ve been observing the operation first. When we see something that we're not happy with, It’s like, you deserve better! We’ll fix this and we’ll get people working on it.

T: It’s not just about selling a venue; it’s about improving it every day once you’re there.

From Our Dietitians: Grain-Fed or Grass-Fed Beef