On Our Shelves: Bee Wilson’s Consider the Fork 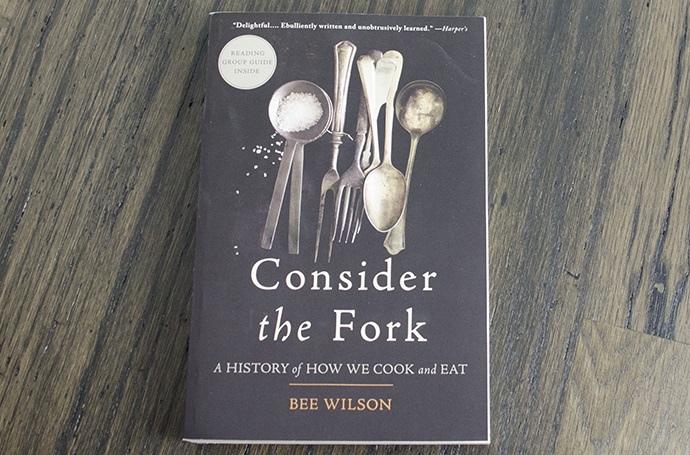 Food writer Bee Wilson’s 2012 Consider the Fork: A History of How We Cook and Eat is a playful, fact-packed, and unabashedly scholarly narrative about the evolution of our culinary tools. Feminist by subject and presentation, the text is unafraid to find interest in the domestic and traditionally female task of preparing food.

Wilson begins by reminding us that “every age has its technology.” Stone or sous vide, every new invention enables another, creating new problems to be overcome and new technology to be improved upon. She leads us to examine what our tools say about our humanity—the combination of luck, thought, effort, and skill that’s brought us to the modern day.


This structure is punctuated by chapter capstones that highlight a particularly unusual invention—from the egg timer to the toaster—and a bevy of interesting factoids derived from impressive primary sources as well as interviews with modern chefs, historians, and reenactors. In “Knives,” for example, we learn that everyone in medieval Europe has his or her own sharp, dagger-like knife, so people would bring their own blades to the table. Eventually, a desire to move away from the idea of violence or threat during a meal led to our helpless modern-day butter knives. In “Eat,” we learn that using someone’s personal chopsticks is considered as disgusting as using his toothbrush in Japan—which is part of why the disposable chopstick industry is so prevalent. Unexpectedly, the majority of those disposable chopsticks are made from sweet gum trees in the state of Georgia and shipped all the way to Japan!

Though Wilson carries us through a chronological world over ever-improving tools, she reminds us that, “In the kitchens we actually inhabit, old and new technologies overlap and coexist.” Equally at home in your kitchen are your great-grandmother’s ice-cream scoop, your dad’s manual can-opener, the potholder your daughter wove at camp, and the food processor you bought last year for your birthday. We keep these things around not only because they’re useful, but also because they hold memories—both personal and for human culture at large.

Willson’s joyful technological enthusiasm is warm without being naïve, and her sense of wonderment at human innovation is contagious. You won’t be disappointed with this as your summer read!