On Our Shelves: Mark Kurlansky’s Salt 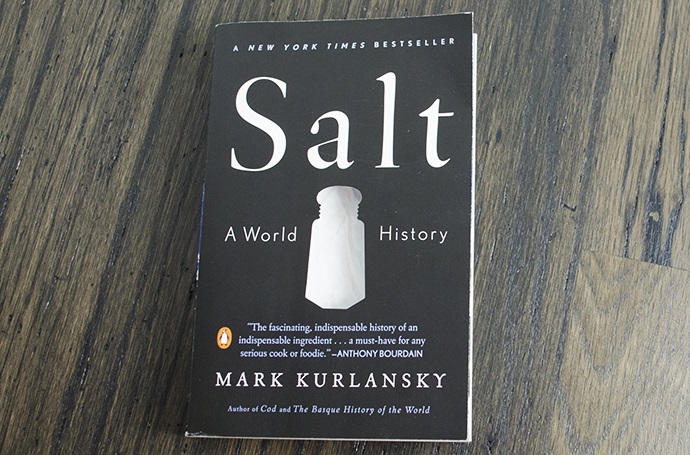 Mark Kurlansky’s 2002 Salt gives a remarkable overview of the history of salt—and salt’s impact on the rest of history. His survey is incredibly broad in scope, addressing East and West, Old World and New alike.

Kurlansky opens Salt by describing how, in ancient times, salt was associated with magic and fertility. It was a Hebrew symbol of the covenant with God, the sign of a sealed bargain; it was thought to deter evil spirits, and it was the first thing brought into a new home. Beyond its mystical and spiritual associations, salt was a biological necessity. As societies moved from hunter-gatherer to agrarian, they discovered that without salt, both humans and livestock would die. One of the first international commodities, and thought to be a rare and limited resource, salt inspired trade routes, sustained empires, and incited rebellions.

The oldest known salt works date from 6000 BC in Shanxi, China. Salt was first scraped from the ground when lake water evaporated, then collected from water boiled in clay pots, then from water boiled in iron vessels. Salt was expensive, so rather than sprinkle it directly on food, the Chinese used it in condiments (like soy sauce) and in pickling a variety of vegetables. The Chinese search for brine wells underground even led to their discovery of natural gas around 100 AD. The Chinese were also the first—but not the only—to instate a government monopoly on salt.

Salt was of equal importance in Egypt. During dry years, the inhabitants of the Nile River Valley relied on fish and meat they’d cured with salt, and vegetables they’d pickled. They got their salt by evaporating sea water, but also through trade in Libya, Ethiopia, and the Mediterranean. They had a variety of salts, one of which, natron, was used specifically for embalming the dead.

Rome used salt for nation-building. Wealthy Romans subsidized salt to appease the plebeians, with the hope that they wouldn’t rise up. They also needed salt for soldiers and horses. They acquired salt works in their conquest, and at times even paid their soldiers in salt! They also salted their food heavily—to preserve olives, hams, and Bluefin tuna; to season greens (coining the word “salad”); and to accent their dishes with four different types of salty fermented fish sauce.

Interested in learning more? Pick up Kurlansky’s book, which describes the history of salt in detail to the modern day. No time? Check out some of the fun facts he includes in Salt below!

From Our Kitchen: Frozen Fruit Pops