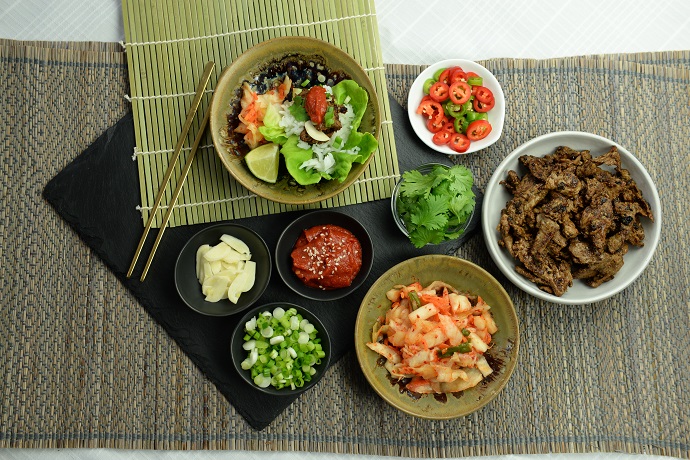 Most of Koreans’ protein traditionally comes from soy. Soy is eaten in many forms—fresh soybeans as a snack, sprouts in soups and salads, and tofu in mains, sides, and sauces. Mung beans are ground into flour to make cellophane noodles. Chicken, egg, ox bones, pork, and seafood are additional protein sources.

In general, Koreans don’t enjoy very sweet things. Texture is important to them, especially when it comes to the preparation of fruits and vegetables. Temperature is similarly important—rice is served hot, soups and stews are served very hot, and pickled veggies are served cold or at room temperature. Despite these commonalities, flavors differ significantly by region. South Korea has eight distinct provinces that are divided by natural borders like rivers and mountains, each with its own climate, resources—and as a result, cuisine.

Industrialization has changed South Korean eating habits. For example, Koreans now eat much more meat and poultry. They have greater access to cooking oil and animal fats for frying, which was a rare method of preparation. And younger Koreans have developed a palate for resource-intensive foods like beef, granulated sugar, and white bread. As a result, bulgogi (Korean beef barbecue) is a popular dish.

Koreans serve the same types of foods in different portions at all three meals of the day—unlike Americans, they don’t tend towards specific “breakfast foods.” Korean meals are composed of three basics: boiled short-grain rice, kimchi, and soup. Koreans eat breakfast early in the morning, usually before 7 AM. They often eat out for lunch, as it’s inexpensive and an opportunity to socialize with coworkers over shared dishes at a communal table. Dinner is Koreans’ biggest, most relaxed meal of the day. They’ll often enjoy rice, kimchi, soup, and banchan (side dishes)—the last of which are often purchased rather than homemade. Sometimes they’ll cook chongol (a one-pot stew) or barbecue over a gas burner at the table.

Traditionally, Koreans sit on cushions on the floor for meals, and they eat with steel or silver chopsticks and spoons. Accompanying beverages could include water, roasted barley tea, sikhye (a fermented rice drink), or regular tea. Koreans don’t serve sweet or carbonated drinks like soda alongside their meals. For dessert, they choose fruit over baked goods or other sweets.

South Koreans have many choices when they decide to eat out. There are many Chinese restaurants and American-style fast food joints. There are also a lot of sushi places, some of which serve traditional Japanese or Americanized sushi, and some of which serve traditional Korean sushi, which is raw fish with a spicy chili-vinegar sauce and lettuce for wrapping. Restaurants serving Korean food are often very specialized—for example, a restaurant might serve only cold noodles, only hot noodles, or only bibimbap (a popular Korean rice bowl with protein and veggies).

Kimchi, a fermented side dish of pickled cabbage in red chili paste, is so popular that it’s been declared the national dish of Korea. The Kimchi Museum in Seoul lists 200 recipes, but the best-known type is made with salt, Napa cabbage, red pepper flakes, chives, garlic, and salted fish.

Koreans cook on the stovetop or in a rice cooker, not in an oven.

Koreans serve noodles at weddings to represent the couple’s long, happy life together.

Managing a Food Allergy While Traveling

From Our Kitchen: Savory Oatmeal with Bacon, Cheddar, and Tomatoes