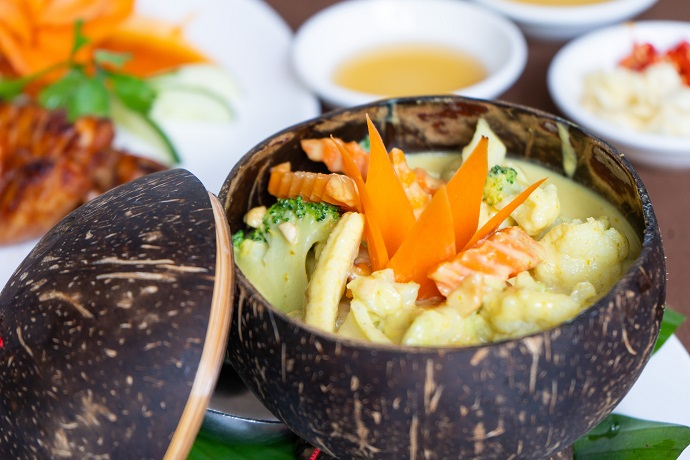 Although food is prominent in Cambodians’ daily lives and culture, many Cambodians don’t know how to cook. After World War II, well-off Cambodian families hired servants to cook French dishes for them, so their children learned neither how to cook nor how traditional Cambodian food looked and tasted. The problem was exacerbated by the four years of war, famine, and genocide brought on by the Khmer Rouge in the late 1960s. Even today, the country has few successful restaurants, and only in dense urban areas—the economy, still in recovery, can’t support them. Nonetheless, there are those Cambodians who uphold the culinary tradition that began with the prosperous, richly storied 600-year reign of the Khmer Empire starting in 800 BC.

Cambodian cuisine shares a lot with neighboring Thailand and Laos, and is influenced by India, Portugal, Spain, and France. It relies heavily on long-grain nonglutinous rice, freshwater fish and shellfish, fresh fruits and vegetables, and prahok, a ubiquitous fermented fish paste. Salty, sour, bitter, and hot flavors are valued, as are intense, aromatic herbs and spices. The texture of a dish is of great importance.

A common Cambodian meal is steamed rice with several grilled or stir-fried side dishes, including many fruits and vegetables. For example, they might serve vegetables in a soup, in a stir-fry with garlic, onions, and meat, or lightly steamed with prahok for dipping.

Cambodians put out all of their food at the same time, family-style, with many condiments to adjust each bite to one’s liking. They set out small dishes of prahok, soy sauce, salt, pepper, kaffir limes, and red bird’s eye chiles. They eat with forks and spoons, as well as chopsticks for noodle dishes. To accompany the meal, they serve jasmine tea, cold water, and more rice. Desserts often include sweet, creamy coconut milk.

Cambodians refer to spiky, odorous durian as the king of fruits and delicate, purplish mangosteen as the queen.