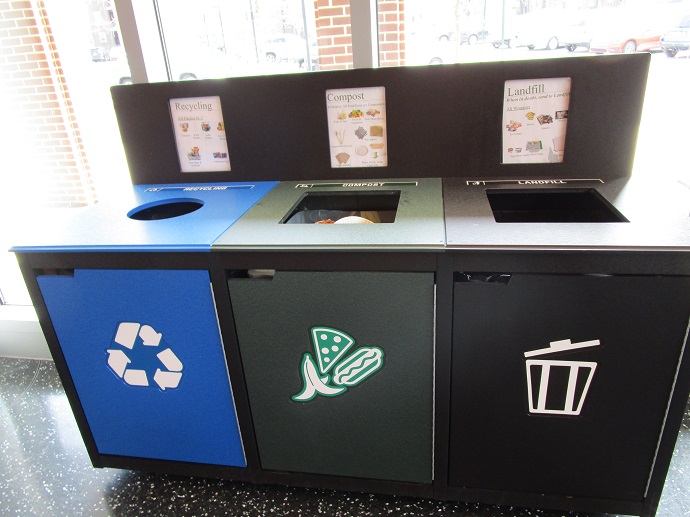 In school dining communities, it’s easy to see how much food doesn’t get eaten. Trash bags can fill up fast – and a majority of what’s discarded doesn’t have to end up in a landfill. But school dining is also one of the best settings for successful waste reduction programs. At John Burroughs School (JBS) in St. Louis, Missouri, they’ve reached the gold standard in school dining sustainability, achieving a 100% waste-free kitchen and dining room.

Environmental awareness is deep-rooted at JBS, a coeducational school for grades 7-12 named after the American naturalist John Burroughs, who said, “I go to nature to be soothed and healed, and to have my senses put in order.” Everyday practices include recycling discarded electronic devices and lightbulbs, using green cleaning products, and designating special parking spaces for carpooling and energy-efficient cars. The campus garden is maintained by the gardening class, and the school’s physical plant vehicles (lawn mowers and tractor) are fueled by biodiesel produced in the science department from the kitchen’s used grease.

It’s no wonder that their dining program, which serves 630 students and 150 faculty members, is impressively green.

SAGE District Manager Shelli Pate was the Food Service Director at Burroughs for 14 years. In 2011, when the school decided to make sustainability a top priority, the administration turned to her to discuss sustainability in the dining hall. Shelli said, “They were amazed by what was already being done, but we took it to the next level.”

According to Shelli, the real game changer for JBS was switching to single-stream recycling and composting – all recyclables go into one bin, and all compostable materials go in another. Prior to this, the campus threw away five 55-gallon bags of trash each day. Now, it’s rare for them to fill one trash bag a day.

Composting at JBS means putting everything that’s not eaten at lunch, including biodegradable napkins and food scraps, into a bin. That’s resulted in three 75-gallon bins of compostable material that are picked up three times a week by Blue Skies Recycling and delivered to St. Louis Composting to be turned into nutrient-rich soil.

You won’t find a plastic bottle in JBS’ single-stream recycling containers — they’ve all but eliminated them on campus. Students bring their own water bottles and fill up throughout the day at water dispensers. When it’s necessary to serve to-go water, guests are provided cans or cartons only.

Shelli points out that sustainable dining communities are aware communities. “We all have a habit that when we’re walking past a trash can, we just put whatever we have to throw away in it.  At Burroughs, it took just a little bit of community training to get people into the habit of thinking about where things go. The students were involved in the training as well, so it didn’t take too long.” And, signage helps. All bins at JBS are clearly labeled.

Sustainability in K-12 independent school dining is becoming the norm, not the exception. And colleges are not just sustainable, they’re often leading the way in sustainability ꟷ using data-driven goals to make annual improvements campus-wide, including in the dining hall. In a few years, we expect the efforts at John Burroughs to be standard operating practice, and we look forward to sharing many more waste-free dining success stories.

Food Additives from A to Z

On the Road with a SAGE Chef