From Our Dietitians: Replacing Eggs with Aquafaba 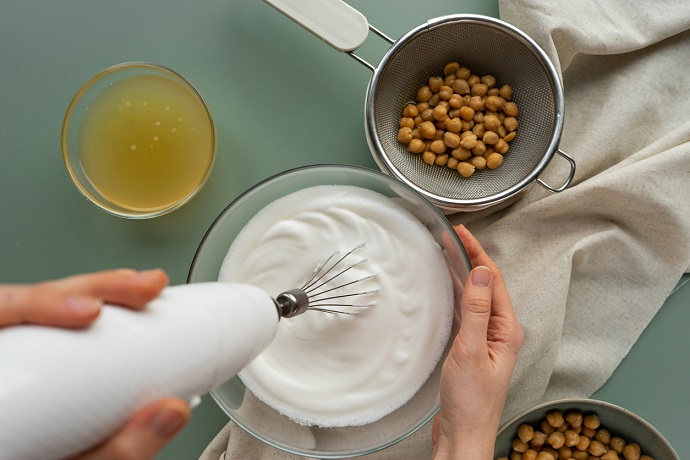 When you use canned beans, you probably pour the liquid in the can down the drain. But did you know that you can use it in recipes? The liquid, called aquafaba, can function as an allergen-free, vegan egg replacer.

Aquafaba is created when beans are cooked. As the beans cook, the starches absorb water, which makes them expand and then break down. As the starches break down, they release into the water along with a small amount of protein, sugars, calcium, and iron. The canning process allows for more of the starches to be pulled into the liquid, making it more viscous. Once the aquafaba is whipped, it can provide the lift and structure that eggs do in baked goods and more!

Although aquafaba can be a culinary replacement for eggs, it’s not nutritionally equivalent. Eggs are nutrient dense. They’re a good source of high-quality protein; fat; B vitamins, including choline and selenium; and antioxidants, including lutein, which are good for eye health.

To try out aquafaba for yourself, make this delicious Vegan Meringue recipe.

Step 2: In a large mixing bowl, pour the aquafaba. Add the cream of tartar.

Step 3: Using a stand mixer with a whisk attachment, beat the mixture until fluffy.

Step 4: Add the vanilla extract and continue to beat.

Step 5: Slowly add in the sugar, mixing between each addition.

Step 7: Bake in the oven for 1.5 to 2 hours. Meringues will be dry to the touch when finished. Let them cool, and enjoy!

*To prevent food waste, cook the chickpeas. Preheat your oven to 450°F. Toss the chickpeas with oil and your favorite spices. Roast them in the oven until they’re crispy, about 30 minutes.

The Power of Produce

From Our Dietitians: The Snacking Trend