On Our Shelves: Kitchen Literacy 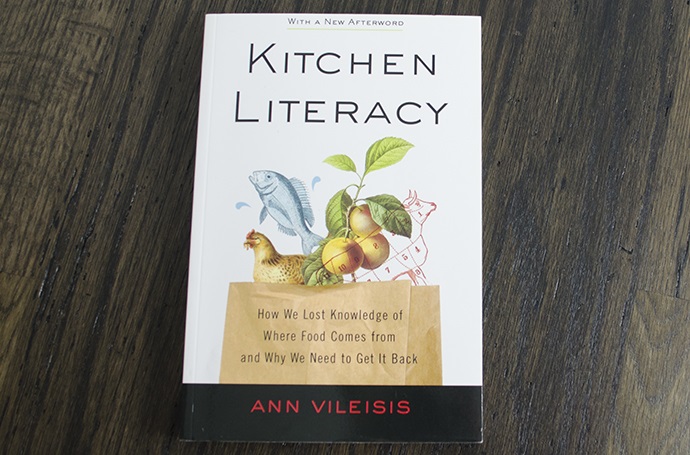 In Kitchen Literacy (2008), independent scholar Ann Vileisis examines “how we lost knowledge of where food comes from and why we need to get it back.” Through overarching historical narratives and attentive close-readings of primary sources like diaries, cookbooks, and advertisements, Vileisis addresses the scientific, political, and personal impact of America’s parabolic trajectory back to the land.

The narrative begins in 1998, when Vileisis wonders where the food she’s getting at the store is really coming from—what’s its story? She contrasts her own inability to trace her food’s origin with the diary of a late 18th century woman, who spent much of her life planning and preparing meals. This woman’s experience, the epitome of local sourcing, was representative of her time. She grew and gathered veggies, herbs, and eggs on her own property, bought or bartered meat from neighboring farms, and baked with flour ground at a local mill and grown in her own family’s fields. She had a strong network of family, friends, and neighbors with whom to exchange and share goods during hard times. She often found herself planning a year in advance—what seeds to buy, what crops to plant when, what animals to secure for butchery, and what produce to put up for winter. Compare that to our modern habit of shopping once or twice a week, confident that whatever food we want will always be available on the shelves!

Vileisis continues by explaining how, with industrialization, food came from farther away, and more affluent Americans got away from doing the cooking—let alone the growing, or even the buying. What was bad for consumers was good for big business—because customers didn’t know what to look for anymore, industrial producers were shielded from criticism. At the same time, food quality decreased. Goods traveled long distances on railroads in poor storage conditions—unsealed, unrefrigerated, and unregulated. Animals were packed so tightly on trains that their meat was bruised. Wild foods, like oysters and wild pigeons, were no longer available because they had been so heavily hunted and harvested. And canned foods were another matter altogether. People could no longer tell the quality of their food by its scent or appearance, and added colors and inaccurate labels made it hard to know what was in the food even once it was opened.

Although progress was made with the 1906 Pure Food and Drug Act and the first federal meat inspection bill, brand names were the most useful distinction for safety and quality. And the consequences of choosing the wrong brand were very real—the American public served as guinea pigs for preservatives, pesticides, artificial additives, and even well-known toxins. It took many deaths from arsenic and lead poisoning for the FDA to take a stand.

The World Wars had a serious impact on food, as well. Rationing led to a different type of cooking, strategic and frugal. And postwar, people’s residual fear of deprivation created an environment where cheap, reliable abundance was valued much more than freshness or quality. This increased distance and reliance on processed foods lead to women who knew so little about food that they weren’t confident they could choose good produce or meat in the grocery store, let alone cook a delicious meal from scratch.

In the 50s and 60s, cooking in the home became accessible and enjoyable again, largely in part to “the Julia Child effect.” In the mid-60s, a counterculture of political and ecological movements invited “natural” foods. Alice Waters of Chez Panisse fame led the fresh foods and farm-to-table movements. Science brought a wealth of new possibilities into the food world—now, consumers could have genetically engineered wheat, organic milk, and grass-fed beef. They wondered what each term meant for their health, for animal welfare, and for the environment. They put pressure on companies to first label and then remove additives—to make food that’s safe and nutritious, and to market transparently. And slowly, through beef boycotts and deforestation protests, consumers realized that they could make a difference.

For the first time since the Industrial Revolution, individual consumers felt like they—not the manufacturers—had power. Not only could they choose different products and different brands; they could opt out altogether and direct their capital towards a food system they believed in. Starting in the late 60s, it became possible to know your product through farmer’s markets and CSAs. Many people even started gardens of their own to supplement what they bought.

And with that, Vileisis brings us to today. Though modern, affluent Americans can be confident that their food is safe and wholesome, we still have to contend with issues of obesity and climate change. How we address these problems may well become the next chapter of Vileisis’ book.

Leadership Lessons from the Kitchen