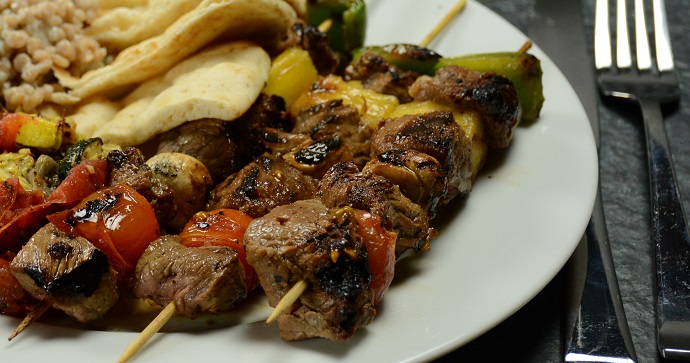 Join us as we continue to explore the traditional diet and popular dishes, kitchen equipment, and eating practices of other countries! This week, we visit Lebanon, a predominately urban Muslim country in the Middle East.

The Diet and Popular Dishes:
The Lebanese diet is heavy on produce, like tomatoes, eggplant, zucchini, potatoes, spinach, chard, olives, citrus, grapes, apples, grape leaves, and chickpeas. They pair their fruits, veggies, and legumes with wheat, freekeh (toasted green wheat), and rice, as well as fish, lamb, chicken, beef, and goat.  They cook with olive oil, veggie oil, and butter, the last of which they clarify to make sweet pastries. While dairy is commonly consumed in Lebanon, it’s usually eaten as yogurt, lebneh (a smooth, cheese-like yogurt), or cheese, rather than drunk fresh.

Lebanese cuisine uses lemon juice and olive oil heavily. Instead of salt and pepper, the Lebanese have salt and allspice at the table to season their food. They flavor stews with sour fruit juice (e.g., lemon, tomato) and allspice in a nod to preservation practices from the Middle Ages.

Lebanon is probably best known for its shish kebab, shawarma, hummus, baba ghanoush, and falafel. A less well-known but popular meal is fish fried in olive oil. It may be eaten with rice, lemon, and salad, or in sayyadiyyi, a dish of fish, fried onion, and rice.

Cooking Methods and Equipment:
Traditional cooking methods still have an impact on the modern Lebanese kitchen. For instance, traditional kitchens didn’t have ovens, so the Lebanese would prepare meatloaves, stews, and pastries in siniyyas and bring them to the local baker to cook. A siniyya is a large circular baking dish with inch-high sides and a 16-inch diameter—because of their unusual shape, many would fit in the baker’s oven at once. Even in kitchens with ovens, siniyyas are still used today.

Additionally, many Lebanese have a mortar and pestle to make kibbi, a paste of meat, bulgur, and onion that accompanies a traditional Lebanese dinner. However, because it takes so long to grind the paste by hand, most people today use a food processor instead.

Restaurants serve well-known dishes like shish kebab and falafel, as well as famous Middle-Eastern pastries, which often include sugar syrups, dried fruits, pistachios, and cream fillings. In fact, there are traditional male-only coffeehouses that serve these pastries alongside coffee throughout the day.

For major Islamic holidays, or Eids, Lebanese Muslims sacrifice sheep. In modern times, many will buy lamb or mutton from the butcher shop. During Ramadan, a month-long celebration to commemorate the revelation of the Q’uran, they fast from food and drink from sunrise to sunset.

From Our Dietitians: All Things Natural, Organic, and GMO-Free

On Our Shelves: Kitchen Literacy